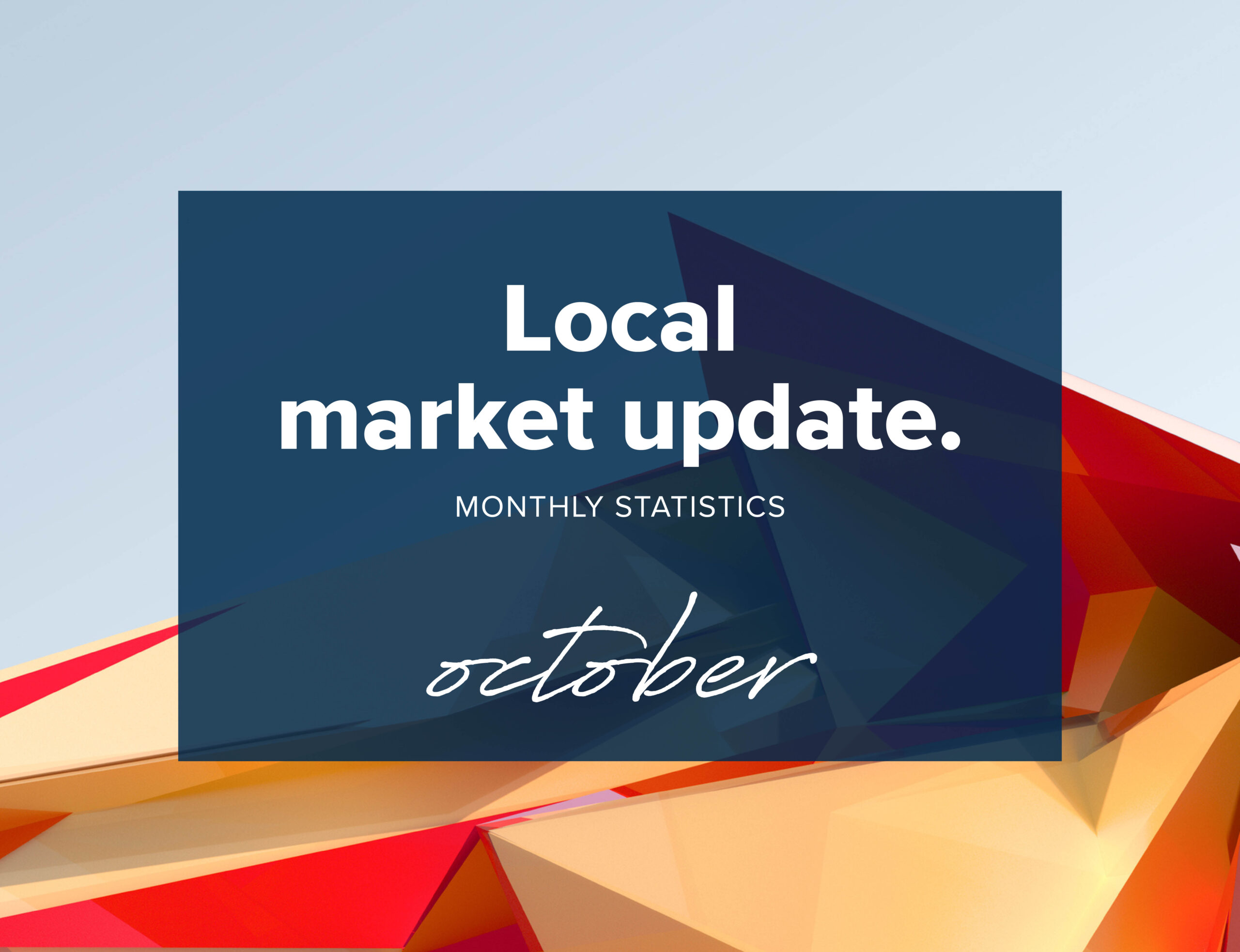 Increasing listings inventory, lengthening time on market and a slowdown in home price increases across the Puget Sound region herald a return to normalcy and better opportunities for buyers. According to September data from the NWMLS, active listings nearly doubled from a year ago, with pending sales declining by about 31%.

“The ‘Great Reversion’ continues, with the number of homes in the tri-county market of King, Pierce and Snohomish counties up 106% from a year ago,” says Windermere’s Chief Economist Matthew Gardner. “It’s worth noting that current inventory levels in King and Snohomish counties are still around 13% lower than they were in September 2019 prior to the pandemic-induced market shift.”

While the recent sales data may be pointing to a market shift of a different sort, they may reflect some normal seasonal trends as well. October is typically an average selling month, with November typically performing about 76% as well as an average month, and December and January slowing even further as the holidays and end of year pull some buyers from their home searches.

That being said, last month still saw year-over-year price increases in the Puget Sound’s busiest metros, despite some month-over-month price dips. King County single-family homes saw a price decrease from $899,999 in August to $875,000 last month. That’s still up from last September’s median price of $825,600, and condos also saw year-over-year price increases, from $466,501 last September to $483,000 this September. With about two months’ inventory for both housing types, King County buyers are better able to take their time and consider the details of their purchase.

Seattle also saw a slight month-over month decrease in single-family home prices, from a median price of $927,000 in August to $900,000 last month. That’s still up six percent from $850,000 in September 2021. Conversely, year-over-year condo prices slumped a bit, falling to $499,000 last month from $505,000 in September 2021. Condo inventory has increased as well, with buyers benefitting from over two months’ supply. Sellers are encouraged to price wisely and accurately to beat the competition in these conditions.

The Eastside was the only area to see prices stay the same month-over-month, with the median price for a single-family home remaining constant at $1,350,000. That’s an increase from the median price of $1,310,000 in 2021. Active inventory also increased, up to 1.9 months’ supply. The last time the Eastside had this many listings (approximately 1,200) was before the pandemic in 2019.

Snohomish County followed Seattle and King County, with prices dropping slightly to a median of $735,000 for single-family homes last month — down from $749,000 in August. Inventory was slightly tighter in the area, with about 1.75 months’ supply, though it’s still an improvement over the tight inventory at the height of the pandemic.

Many buyers are feeling a bit of a “pandemic hangover” when it comes to interest rates, which may be contributing to the increase in inventory across the region. The conditions that led to the historic low interest rates were unprecedented, and buyers now need to be willing to consider buying at a higher rate with the goal of refinancing later on if they’re able.

The future of the local market will be dictated by fluctuations in interest rates. If rates increase from the September average of 6.11%, real estate experts expect new pending sales to continue to be 25% – 30% below the prior year in units. Median closed sale prices will roughly decline 10% for each 1% increase in interest rates. However, if interest rates decline from the September average, we can expect pending sales to increase, prices to remain flat and active inventory to decline more than normal.

Matthew Gardner also points out that home prices “remain positive compared to a year ago.” He doesn’t expect this to change by the end of 2022. By spring, however, Gardner believes “it’s likely that year-over-year prices will start to trend negative. That said, I firmly believe that this will only be a short period of correction, so homeowners in the Puget Sound area shouldn’t be too concerned, especially given that 64% of them are sitting on over 50% of home equity.”

If you have questions about how home inventory or inflation could impact your position in the real estate market, please connect with your Windermere broker. 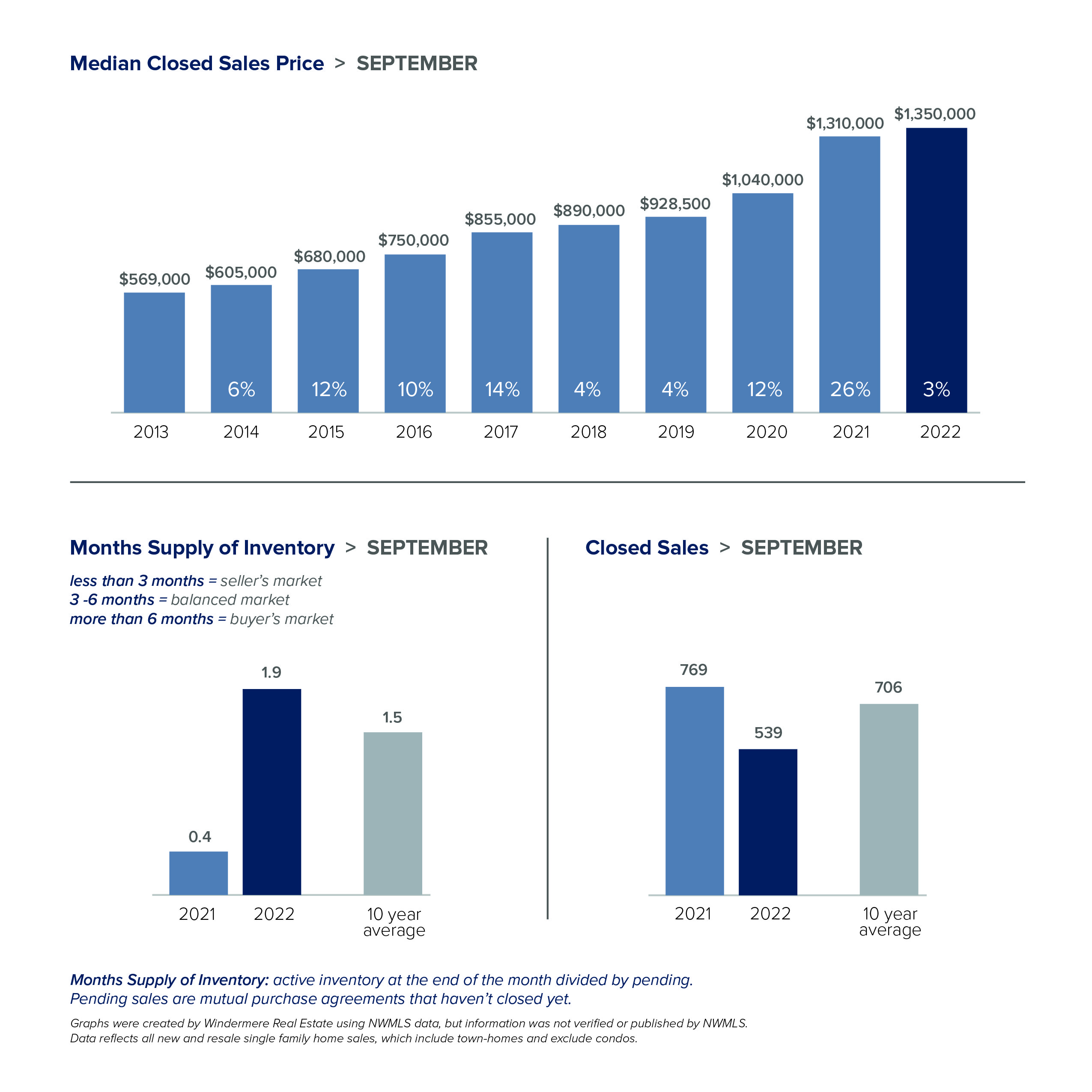 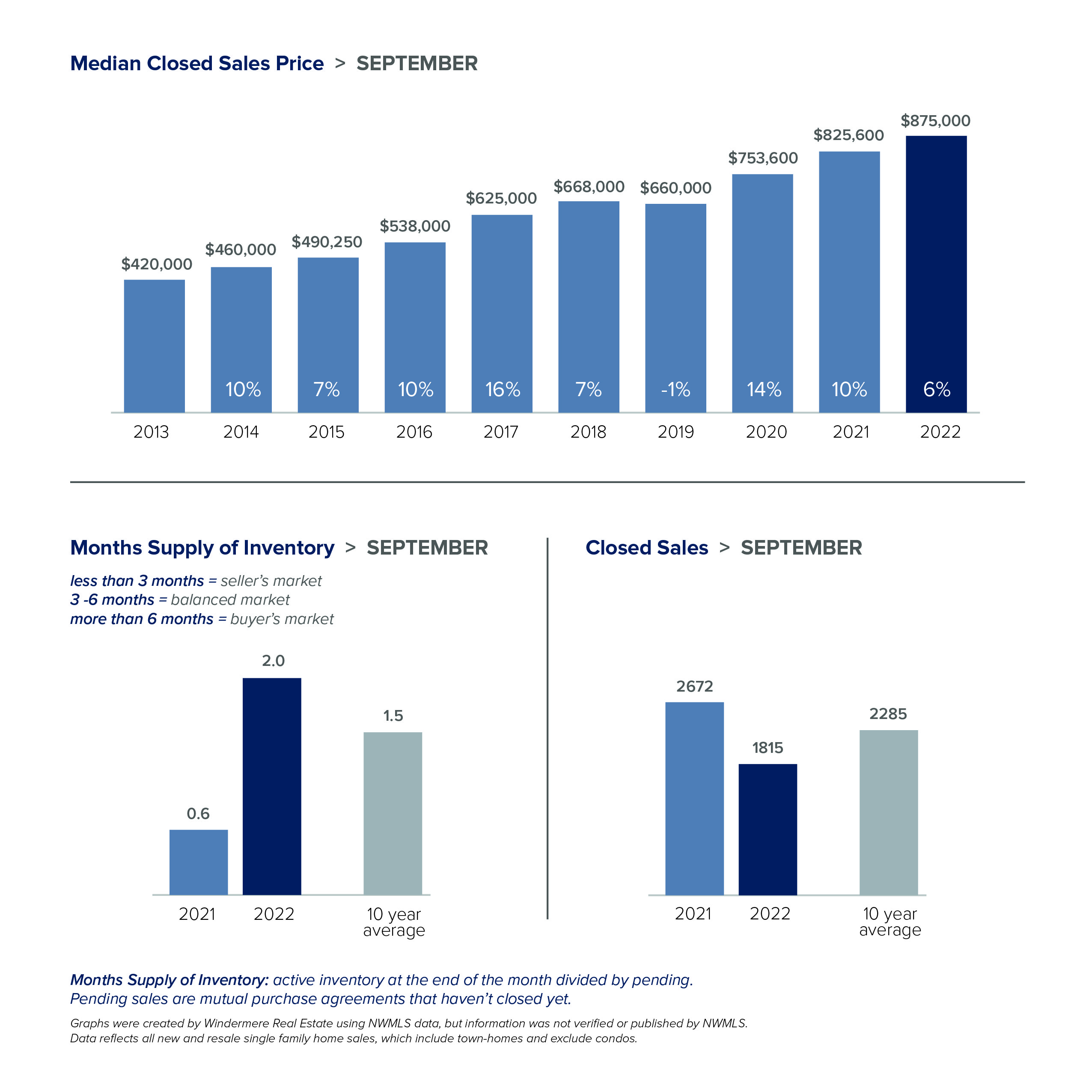 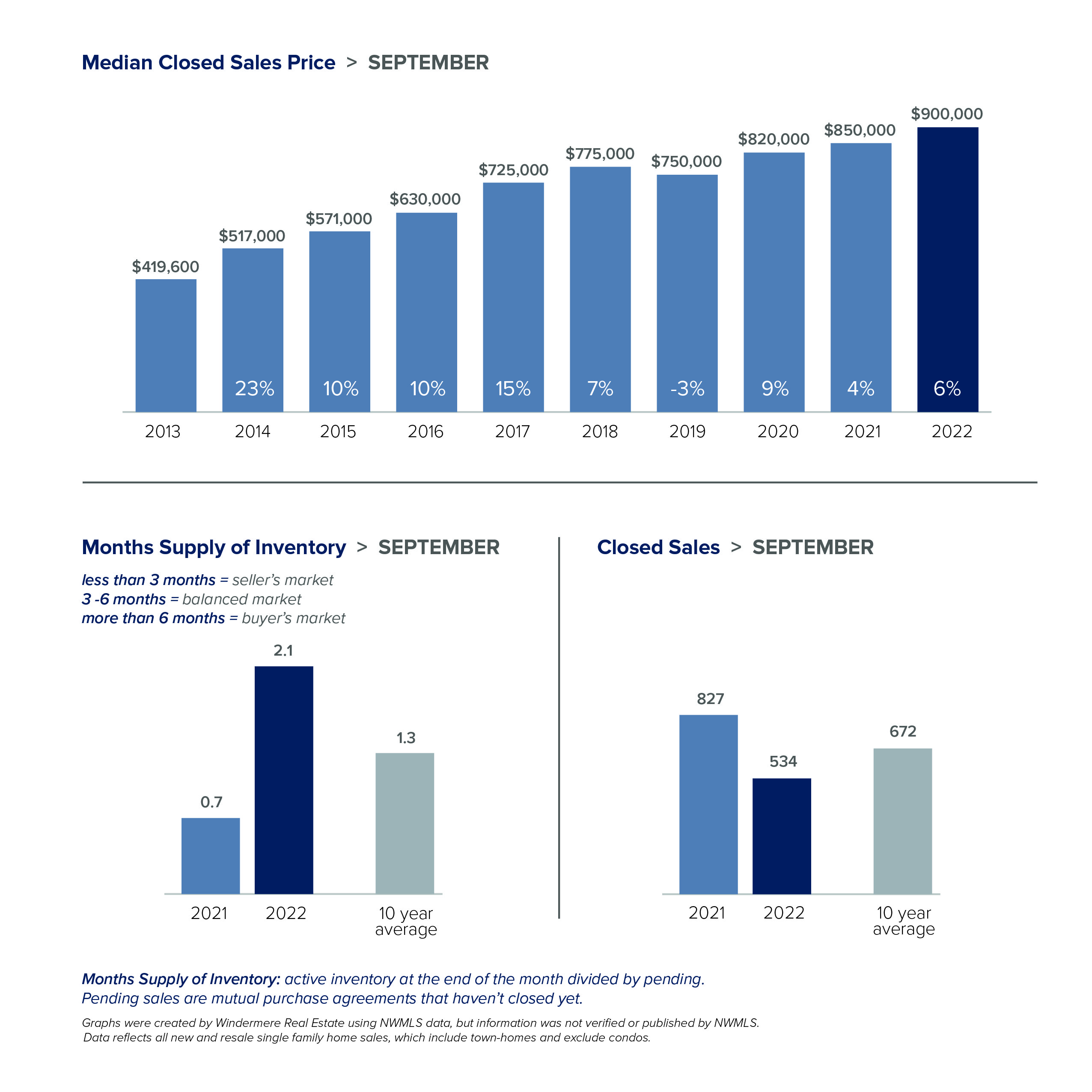 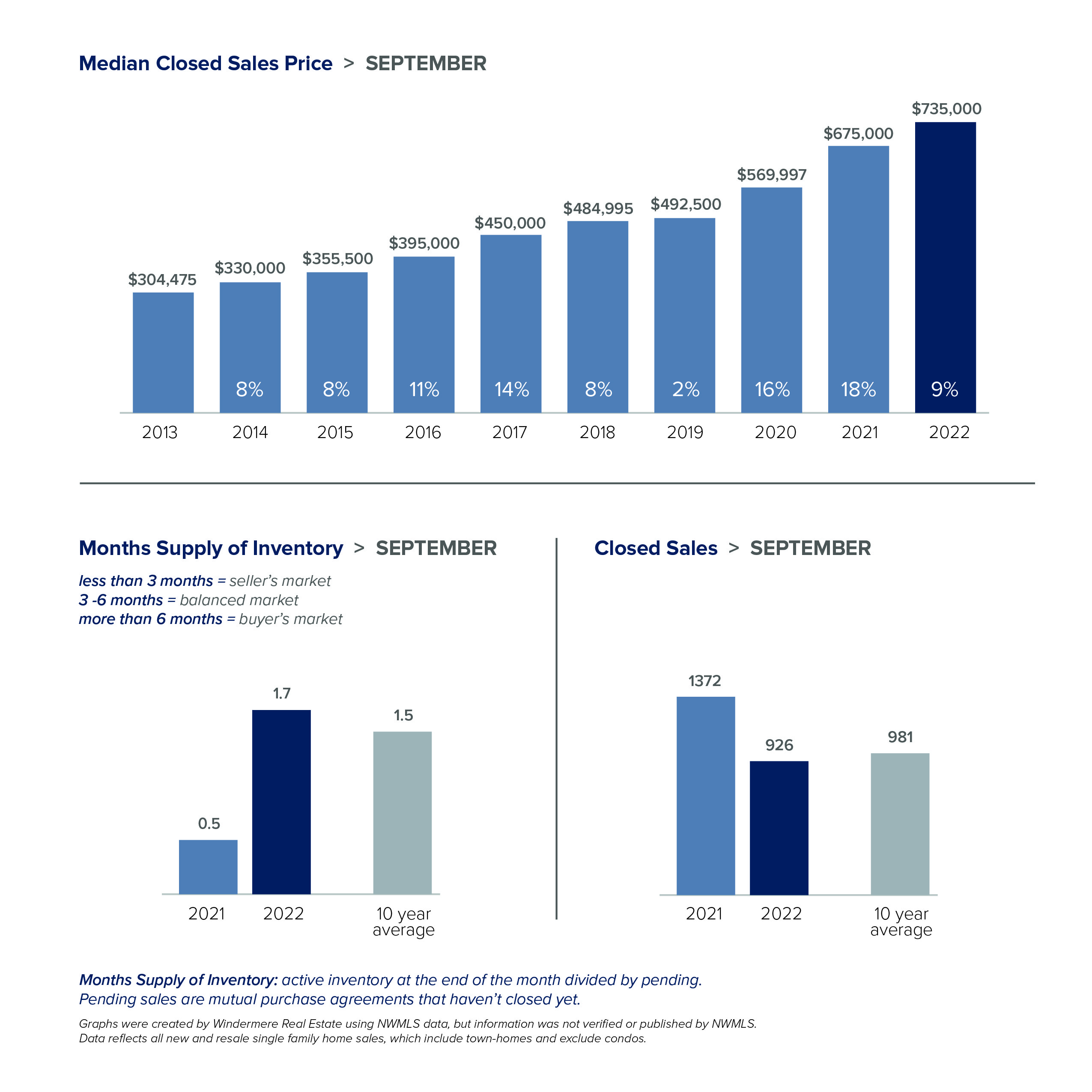